What Is An Iron Condor Option Spread? 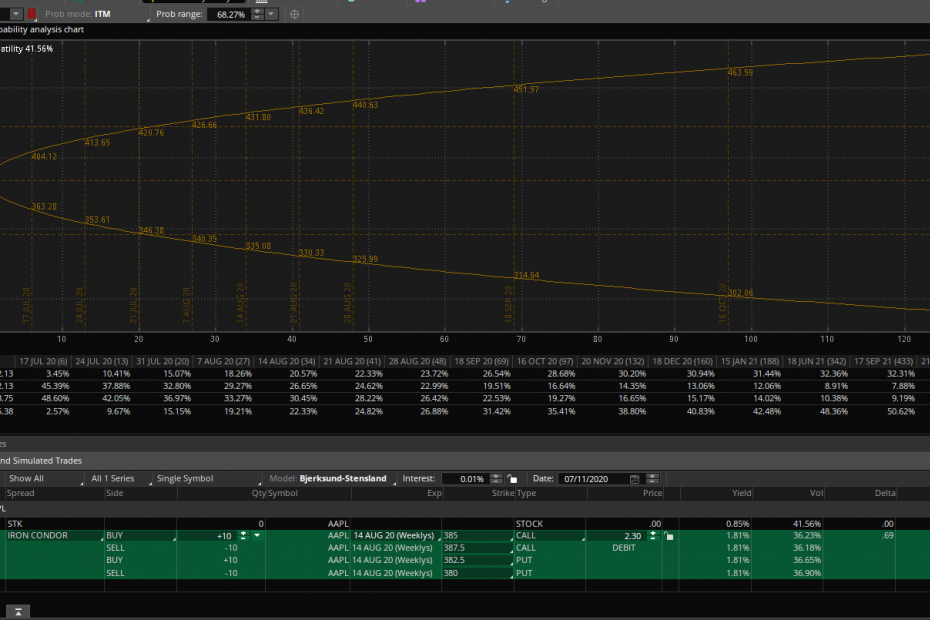 Though most option traders take directional trades – bets that a stock or index will specifically move higher or lower – some savvy traders recognize that it’s possible to generate a profit with options when the underlying trading instrument doesn’t move at all. Better still, these neutral strategies largely overcome one of the chief drawbacks of straight-forward buy/sell option trades. The technique is called an iron condor spread, and when used properly, they can translate into steady income streams for those who utilize them.

Most iron condors are issued as ‘credit’ spreads, meaning the buy/sell activity at the trade’s onset means cash is placed into the account immediately; that credit or cash is only kept if the trader doesn’t need to unwind one or both of the spreads. [Reverse iron condors, or debit iron condors, are rarely fruitful.]

An example will clarify exactly how the technique works.

Example of an Iron Condor Trade

For the sake of illustration, assume a trader expects Microsoft (MSFT) shares to stagnate at $50 for more than three months. To achieve profit from the stock’s non-movement, two spreads would be written…. a put spread at $45, and a call spread at $55.

The put spread would involve selling – or shorting – a $45 put that expires in two months (or whatever timeframe is less than the forecasted stagnation, yet still yields a worthy profit), and the purchase of a $40 put with the same expiration.

The $40 put would ‘cost’ approximately $4, while the $45 put would ‘yield’ about $8. The $4 difference between the two puts is the profit or credit this side of the iron condor would offer up front. Maximum profit is achieved as long as the options expire worthless… if MSFT remains above $45 for the entire two month span. If Microsoft shares fall under $45 at any point in time during the trade’s life though, then the risk of the short trade being exercised also poses a risk to at least part of the $4 ($400 per contract) profit.

On the other side of the assumption that Microsoft will hover at $60 for two or more months are the short $55 call, and the long $60 call. Again, both expire at the same time, and at the same time as the puts. The former call option will create about a $8 credit, while the latter will cost about $4. The difference between the two creates a ‘net credit’ of $4, or $400 per contract.

Again, the ideal scenario would be for MSFT to stay under $55 the entire two months, allowing the trader to pocket the $5 credit and face no risk that he or she will need to unwind the call option side of the trade.

And what’s the advantage of writing two spreads rather than just one? Because, if the expectation of a stagnant stock is correct, then writing two spreads doubles the potential income of the trade… and at least one of the legs or the other will have to be profitable.